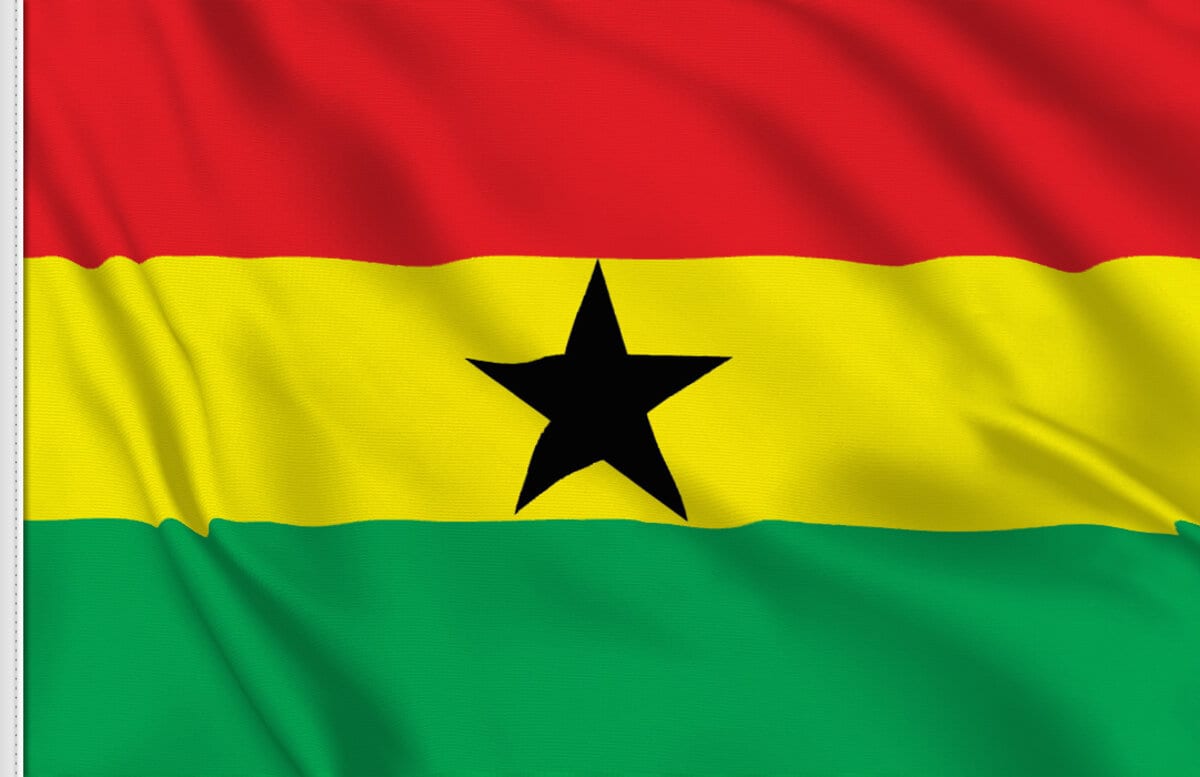 The Ghana flag is the official symbol of the nation of Ghana.

How well do you know the history of the Ghana Flag, the meaning of the colors and the facts behind it? find out here.

The national flag of Ghana was designed and adopted in 1957 . It  was designed by Theodosia Okoh  and was flown until 1962 when it was then reinstated in 1966.

It consists of the Pan-African colours of red, gold, and green, in horizontal stripes, with a black five-pointed star in the centre of the gold stripe

The Ghanaian flag was the second African flag after the flag of the Ethiopian Empire to feature these colours. The flag’s design influenced that of the flag of Guinea-Bissau (1973).

Meaning of the colours of the Ghana Flag

The red represents the blood of those who died in the country’s struggle for independence from Great Britain,

The gold represents the mineral wealth of the country

The green symbolizes the country’s rich forests and natural wealth

The black star is the symbol of African emancipation.

The black star was adopted from the flag of the Black Star Line, a shipping line incorporated by Marcus Garvey that operated from 1919 to 1922. It is where the Ghana national football team derive their nickname, the “Black Stars”.

History of the Ghana Flag

The Ghanaian government flag, adopted in 1957, was flown until 1962. Similarly, when the country formed the Union of African States, the flag of the Union was modeled on Bolivia’s flag, but with two black stars, representing the nations. In May 1959, a third star was added.

Following the January 1964 constitutional referendum, Ghana adopted a variant of the 1957 tricolour with white in the place of yellow, after the colours of Kwame Nkrumah‘s ruling and then-sole legal party Convention People’s Party, making it similar to the flag of Hungary. The original 1957 flag was reinstated on February 1966 following Nkrumah’s overthrow in a coup d’état.

First flag of the Union of African States with Guinea, used between 1958 and 1961.

Second flag of the Union of African States, used between 1961 and 1964 (after Mali joined)

Flag of the Presidency of Ghana since 1966. Presidential Standard of Ghana; replicate of the national flag of Ghana with a gold rim.

Under terms of section 183 of Ghana’s Merchant Shipping Act of 1963, the civil ensign is a red flag with the national flag in a black-fimbriated canton. In 2003, a new merchant shipping act was enacted, however, and this simply provides that “the National Flag of Ghana” is the proper national colours for Ghanaian ships. No mention is made of other flags or other possible flags.

The naval ensign is a red St. George’s Cross on white flag, with the national flag in canton.

The ensign of the Ghana Air Force