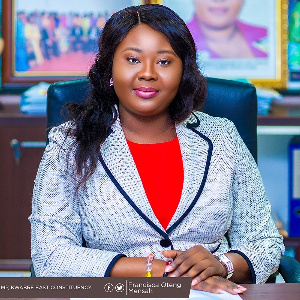 Francisca Oteng-Mensah is a member of parliament of the New Patriotic Party for the Kwabre East Constituency and was known as the youngest parliamentarian of the fourth republic of Ghana at the time of her election in 2016.

Francisca was born at Aboaso Hospital at Mamponteng, Ashanti Region on 14 February 1993 . She is a daughter of Mrs. Joyce Oteng and Dr Kwaku Oteng  a doctor and a businessman who is the C.E.O of the Angel Group of Companies.

Francisca attended three different schools during her basic and primary education. She first attended the Mamponteng Roman Catholic School, then to Revival Preparatory School at Breman and finally to Supreme Saviour International where she completed her Primary Six. She completed her Junior High education at Angel Educational Complex. She then continued to St. Roses Senior High School to complete her Senior High Education.

Her insatiable quest for more academic laurels compelled her to enroll at the Faculty of Law at the Kwame Nkrumah University of Science and Technology (KNUST) where she read law.

Francisca was a second year Law student at the Kwame Nkrumah University of Science and Technology at the time she contested the elections in 2016.

Before her appointment as a member of parliament, she was employed as a Secretary at the Angel Group of Companies in Kumasi.  In December 2017, she was appointed as the chairperson of the National Youth Authority. Francisca is a Christian and fellowships with Assemblies of God Church