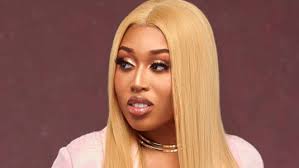 We bring to you Fantana Biography and facts you need to know.

She is from   Nzema land in the Western Region of Ghana. Her real name is Francine Kouffie. Fantana schooled in the United States throughout. She studied Business and Fashion and have her own boutique.

According to her, the stage name Fantana was proposed by Bullet. Giving details, while she was growing up as a kid, she was often referred to as Fanta and Bullet decided to use that for her name.

She is currently signed under Ruff town record label.

There has been reports that the Ruff Town Records signed artiste is an ex-convict after she was said to have been arrested and jailed for stealing.

According to Fantana, her stage name was given to her by her manager Bullet. She noted she liked the name and knew it will brand her well as most of her friends call her Fanta.

According to her, she studied Business and Fashion in school.

Fantana revealed she contacted Wendy Shay via social media. In a series of chats with Wendy followed by her demo, Wendy Shay gave her the chance to meet Bullet.

she once  wore a short and very racy dress to perform ended up showing her pant and liner to the world.

Advertisement
Related Topics:Fantana Biography
Up Next