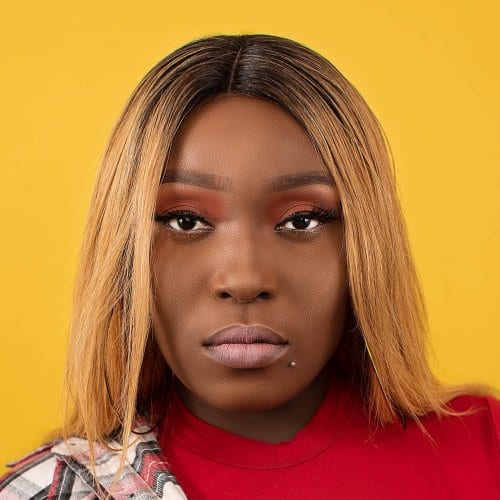 Ruth Eno Adjoa Amankwah Nyame Adom knwn in showbiz as Eno Barony is a Ghanaian rapper. She comes from Tema. We bring to you all you need to know about the rapper in this article. Keep reading.

Eno came to wider attention when she released her first single, “Tonga”, in 2014.

She later recorded more songs including “Megye Wo Boy” in 2015, on which she collaborated with Abrewa Nana.

She recorded a single, “Daawa”, with Shatta Wale in 2016. The same year, she collaborated with rapper Kwaw Kese on a single called “GARI”. She also collaborated on two other singles, “Touch the Body” with Stonebwoy, and “King of Queens” with Medikal. In 2017, she released a song titled “Juice Me” followed by another single with Ebony Reigns, titled “Obiaa Ba Ny3”

In 2014, she was nominated for Vodafone Ghana Music Awards first edition of the unsung category. She performed alongside Popcaan and Jah Vinci at the Ghana Music Week held at the Accra Sports Stadium.

She also headlined the Closeup festival alongside Ghanaian rapper, Sarkodie. She was nominated for Jigwe awards. Her collaboration with Togo’s Mcee Mic Flammez got a nomination for Best Hiphop video at 4Syte Music Video Awards.

She campaigned for the best female rappers awards category and same year got another nomination for Jigwe awards Best New Act. She performed on the Ghana Music Week Festival for the third time in a row in 2015. She performed at the Ghana DJ Awards and at the Ghana Freedom Concert (S Concert).

That same year she headlined the Joy FM Old School reunion alongside Stonebwoy and participated in Adom FM’s Temafest in 2016 alongside other artistes. She was made the music commissioner for Ghana Meets Naija 2017.  Best Rapper Nominee at Vodafone Ghana Music Wards 2018