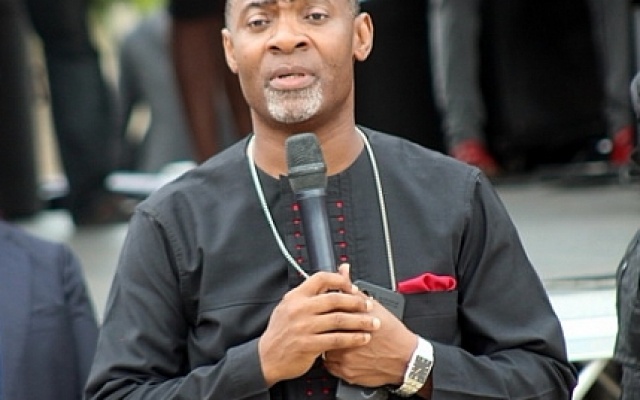 Lawrence Nene Kofi Tetteh is a Ghanaian International Evangelist (born 15th May 1964) in JamesTown, Accra, Ghana. He is the founding President of the Worldwide Miracle Outreach with its international headquarters based in London, UK. He is married to Barbara Tetteh also an ordained minister, an administrator and a social scientist, who is an integral part of his worldwide ministry and their children live with them in the UK.

He is a teacher of the gospel and the author of many books, including Dangers of Offence, Count your Blessings and Benefits of the Anointing. He is a televangelist, a philanthropist, a public speaker and the host of Miracle Touch TV programme worldwide.

He was born into the Ga-Dangme royal lineage to Sampson Kwadjo Tetteh of Dodowa and Juliana Norchoe Tetteh of Osu in the Greater Accra Region of Ghana. He trained as an economist at the Budapest Corvinus University of Economics Sciences in Hungary and also at the London School of Economics (LSE) in the United Kingdom. Whilst he was still pursuing his PhD programme in International Relations at the University in Hungary, he responded to the call as an Evangelist and a preacher of the Gospel. He was ordained into ministry by T.L. Osborn and Archbishop Benson Idahosa in the United Kingdom.

As a researcher in economics and international relations, he had the real opportunity to work with many international organisations but the Lord had completely different plans for him. His style of preaching with singing, dancing and sharing of touching stories through his messages earned him admiration across many denominations.

He has had the privilege to work and minister with other ministers in ministry such as Oral Roberts and Richard Roberts (evangelist) of the Oral Roberts University and Ministries; T.L. Osborn; Kenneth Hagin; Archbishop Desmond Tutu; Morris Cerullo; Archbishop Benson Idahosa, Benny Hinn, Pastor Ayo Oritsejafor, Dr Richard Shakarian among others.

He is one of the few Charismatic Christianity preachers who transcends the barriers of Ecumenical relations and works, collaborating in evangelism and nationwide crusades with mainstream and Pentecostal churches such as the Anglican, Methodist, Presbyterian, Catholic, Apostolic and the Assemblies of God churches to spread the word of God accross Ghana and the world.

In the year 2002, he was the main speaker of the first-ever National crusade of the Methodist Church of Ghana held at the Independence Square in Accra, Ghana with over 200,000 people including the then president of Ghana, John Agyekum Kufuor in attendance.

Subsequent crusades organised with him as the main speaker by the Presbyterians, Anglicans, and other denominations were attended by the then sitting presidents and their representatives; President Jerry John Rawlings, President John Agyekum Kufuor, President John Evans Atta Mills, President John Dramani Mahama and President Nana Akufo-Addo Addo.

He has a rare gift in connecting with many Presidents and world leaders globally and has served as a great counsel and friend to most of them. In 2014 he organised the Asanteman for Christ Crusade together with Dr Richard Roberts of the Oral Roberts Ministries at the Kumasi Sports Stadium with Asantehene Tutu II, the king of the Ashanti Kingdom as the special guest of honour.

Lawrence Tetteh has ministered in many international conferences and universities in Europe, Africa, Asia, Australia and the USA. He has been a regular speaker of the Full Gospel Business Men’s Fellowship International FGBMFI. He was the main speaker for the world convention at Florida, USA 2008 and in Yerevan, Armenia 2013.

He is a fellow of the Royal Society of Arts and the chaplain of the Ghana Christian Council of the UK and Ireland. He was inducted as an Honorary Canon in the Anglican Church in 2017 by the Archbishop Daniel Yinkah Sarfo, Primate of the church of the Province of West Africa.

He is a faculty member of the Sundoulos Advanced Leadership Training (SALT) – Institute of Ghana and a governing council member of the Ghanaian Hungarian Business Council.

Books self published by Lawrence Tetteh include: