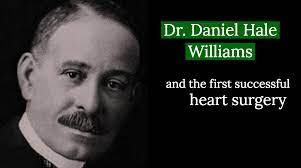 The invention of life-saving procedures has been one of the most important innovations in the history of men. One of such innovations is the performance of heart surgery. In this article, we will be taking you through the life of the pioneering heart surgeon Dr. Daniel Hale Williams.

On the morning of July 10th, 1893, Daniel Hale Williams had a difficult decision to make. James Cornish, a 24-year-old Black man who had been stabbed in a street brawl the night before, was struggling to breathe and deteriorating fast.  Dr. Dan, as he was known to colleagues and patients, suspected that the knife had pierced the young man’s heart.

Luckily, Cornish had two things on his side. First, he was being treated at Chicago’s Provident Hospital and Training School, which Williams had founded two years earlier to serve Black patients. Second, he was in the hands of a gifted surgeon. Dr. Dan decided to do something that no other surgeon had attempted in an emergency setting: He cut open Cornish’s chest to repair the pierced pericardium with sheep’s intestine.The result was one of the world’s first successful open-heart surgeries. Cornish recovered and went on to live for decades more.

It was a remarkable achievement. In the era before antibiotics, blood transfusions, and effective anesthesia, most medical experts believed that heart surgery was almost invariably fatal. Williams proved them wrong. And he had performed the groundbreaking surgery in a small 12-bed hospital serving one of the city’s poorest neighborhoods.

“Dr. Williams Performs an Astonishing Feat,” a local newspaper proclaimed, calling the operation “most delicate as well as daring.”

Williams’ impact can’t be fully captured in monetary terms. He made a good living. At the height of his career he earned about $10,000 a year, roughly equivalent to $320,000 today. But he made less than his peers at white hospitals. And because he chose to treat poor Black people, he made less than he could have.As he once told a friend, “I cannot charge my people large fees.”

Born into a family of small business owners and preachers in Hollidaysburg, Pennsylvania in 1856, Williams had a mix of Black, Native American, and European ancestry. The fifth of seven children, he dropped out of school to become a shoemaker’s apprentice at 12, one year after his father had died of tuberculosis. He later worked on lake boats and in an orchestra before opening a barbershop in Edgerton, Wisconsin at the age of 17.

While working part-time in another barbershop, he trimmed the beard of Henry Palmer, a prominent surgeon who took the young man on as an apprentice. Williams went on to earn a medical degree from Chicago Medical College, which later became part of Northwestern University.

Despite his prestigious medical degree, Williams found that he was denied hospital privileges at every Chicago-area hospital due to his race. That was typical for the time, according to Thomas Ward, a historian and Assistant Dean at New York’s Farmingdale State College. “Hospital access was a huge issue for Black physicians,” says Ward. “Most hospitals didn’t allow Black physicians, even if they allowed Black patients.”

While Williams started a successful private practice, the young doctor found it difficult to conduct operations on patients in their homes. What Williams needed — what the country needed — was a hospital owned and operated by Black doctors, where any doctor could treat patients of any race.

Around the same time that Williams was contemplating this need, a friend asked for a favor. Louis Reynolds, a popular Chicago reverend, came to Williams after his sister, Emma Reynolds, was denied access to all the Chicago nurse training programs because she was Black. Reverend Reynolds asked Williams if he could help Emma get into a training program — but Williams said a different idea. “We’ll do something better,” Williams said according to author Helen Buckler in her 1954 biography of him, Daniel Hale Williams: Negro Surgeon. “We’ll start a hospital of our own and we’ll train dozens and dozens of nurses!”

That dream became a rallying cry for many in Chicago’s black community.  Inspired by the idea of creating a hospital where Black patients would be treated with equal dignity and respect as white patients — and where Black doctors and nurses could train and work — donations began to pour in. Most gave what they could — five dollars here, ten dollars there. One of the more notable donors was Frederick Douglass. The activist and writer gave $50, the proceeds from one of his lectures. On May 4th, 1891, the Provident Hospital opened its doors.

“It was really like the shining star of the community,” says Myetie Hamilton, board chairman of the Chicago-based Provident Foundation. “This was a place where people felt cared for, people felt understood.” To Hamilton, Williams was not just a superb surgeon but also an “entrepreneur of medicine.”

Provident Hospital soon earned a reputation as one of the best hospitals in the country. But although it was owned by a Black physician, operated in a Black community, and had mostly Black patients, Williams did not consider Provident to be a Black hospital. “Williams saw it as an interracial hospital,” says Vanessa Northington Gamble, a professor of medical humanities at George Washington University.

As Provident hospital rose in prominence, so did Williams. After his breakthrough 1893 heart surgery, he was arguably better known than the hospital itself. Invited to practice medicine and give lectures all over the country, particularly in the South, Williams used that platform to advocate for an interracial hospital network. Williams felt strongly that Provident should be the first of many hospitals owned and operated by Black people. Williams argued that every city in the South that had at least 10,000 Black residents should have its own hospital and training program, no matter how difficult it might be at first to get such a program off the ground. He quoted words from his friend and patron Frederick Douglass: “The only way you can succeed is to override the obstacles in your path.”

But at the same time that Williams was working to create more Black hospitals, another force was working in opposition to him. In 1910 Abraham Flexner, an educator hired by The Carnegie Foundation to study the state of medical education in the U.S. and Canada, released a damning report about the state of American medical schools. Flexner, who had no medical training, wrote in his report that most medical schools were poorly run, underfunded facilities designed to make a profit rather than properly train future doctors.

While the Flexner report led to the closure of many medical schools, Black medical schools were hit particularly hard.  From a high of 14 Black medical schools in the late 1800s, only two survived Fletcher’s scathing criticisms: Meharry Medical College in Nashville, and Freedman’s Hospital, now known as Howard University Hospital, in Washington, D.C.  Along with being the only schools left to train Black doctors, both had something else in common: Daniel Hale Williams as a surgeon and a teacher. As Surgeon-in-chief at Freedman’s in 1894, Williams adopted practices that reduced the hospital’s mortality rate to 1.5% from 10% when he arrived. Williams also frequently visited Meharry to perform surgeries and provide free clinics.

Williams was especially aware of the impact he could have in the Jim Crow South. As Gretchen Long, a professor of American Culture at Williams College, notes, “Even though he was not a Southerner he worked quite hard to better (opportunities) for Black doctors in the South.”

Williams’ championing of training programs for Black nurses and doctors turned out to be one of his strongest legacies.  “If you look at the 19th century, most physicians, Black or white, did not go to medical school,” says Gamble. Instead, doctors and nurses often did apprenticeships or training programs that lasted mere weeks, not years. And if physicians did go to medical school, as the Flexner Report confirmed, it was no guarantee that they would get good training. The fact that Williams graduated from a multi-year medical school means that “his qualifications exceeded those of most physicians in the United States,” says Gamble. And Williams wanted every Black doctor, apprentice, nurse and intern to get that same opportunity.

It was during his time at Freedman’s Hospital that he met and married his wife, Alice Johnson. A prominent figure in the D.C. social world, Johnson was known for her charm and culture. The two wed in 1898, but ultimately never had children.

Williams’ impact was wide.  He co-founded the National Medical Association (NMA), the first professional organization for Black doctors, created as an alternative to the American Medical Association which had racist policies at the time. He performed another breakthrough surgery with the successful repair of a spleen, in 1902. And in 1913 he became the first Black surgeon to be accepted into the American College of Surgeons (ACS). “Prejudice being as it was, there were some who said that it wasn’t appropriate for a Black surgeon to be part of the American College of Surgeons,” says Don Nakayama, the current ACS treasurer. But Williams was too accomplished to ignore. In the end, Nakayama explains, “he was acknowledged and accepted as an equal.”

In 1926, Williams had a stroke. He retired to Idlewild, Michigan, where he started his last venture: a small hotel called the Oakmere Hotel which welcomed guests from all over the country. He stayed in Idlewild until his death five years later at the age of 75. In his will, he bequeathed about $350,000 in today’s terms to Black organizations. Some of the money went to building an operating room at a new interracial hospital in Chicago’s South Side, and another chunk of it was set aside as financial aid for Black medical school students at Freedman’s and Meharry’s.

Williams’ legacy lives on. While the original Provident Hospital was closed in 1987 after years of financial woes, it opened back up in 1993.It has served the residents of Chicago for more than 100 years — and has had some famous patients, including Michelle Obama who was born there in 1964.  The Daniel Hale Williams Society, created in 2018 at his alma mater Northwestern, is devoted to recruiting Black men into the medical school, then provides them with mentorship and financial support as they work towards their degree. That’s the type of legacy that Williams would have desired. As he told an audience in Nashville in 1900, “Do not be deterred by the thought you may encounter antagonism. Few enterprises, even those for the betterment of mankind, have smooth sailing.”