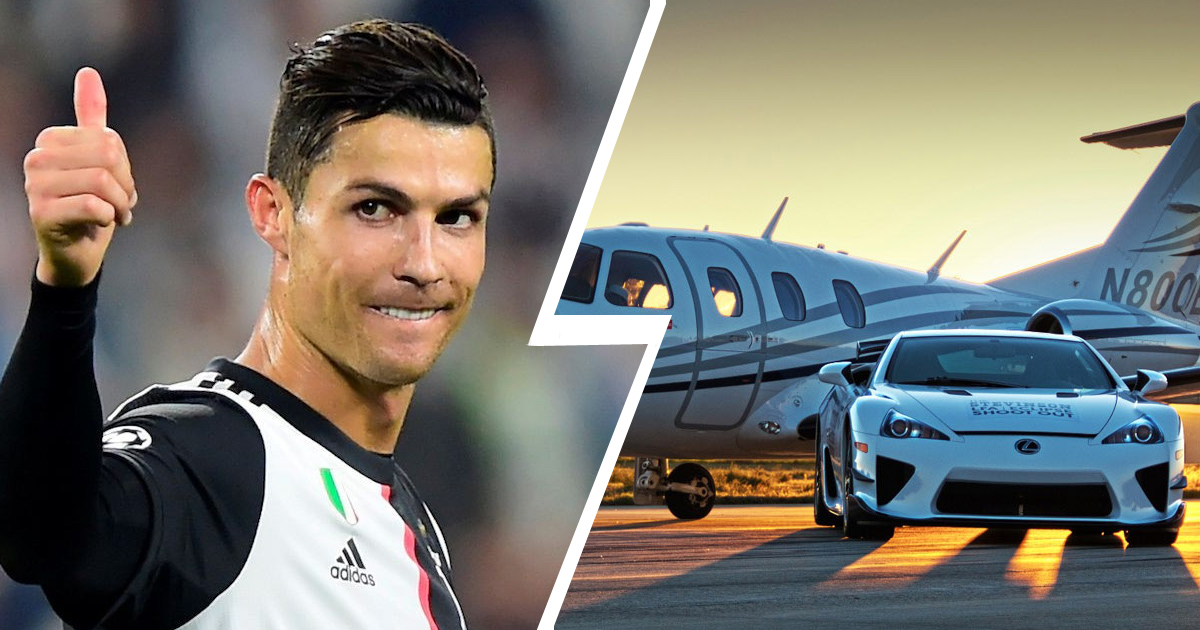 Considered the Greatest Of All Time (G. O. A. T), and also popularly known as CR7 Cristiano Ronaldo is a Portuguese forward and winger who is currently plying his trade with Manchester United and also plays for the Portugal National team.

He has won numerous awards in the course of his glittering career, some of these awards are:

That is for titles, Ronaldo has also set and broken many records in his career. Some of the records he currently holds are listed below ;

Apart from football, Ronaldo also owns chains of businesses which also adds to his wealth, from CR7 hotel, CR7 perfumes and clothesline etc.

Now having been briefed on a short Biography of Ronaldo, I will now update you on some of the luxuries the G.O.A.T spends his millions on. For someone who sits on a ground shaking net worth of over $500 million, Cristiano Ronaldo has spent part of it in acquiring the world’s most expensive and exotic cars. Why not read further to find out some of the jaw dropping cars in his car collection, I bet you will be shocked to find out how much these cars are worth.

The Bugatti Centodieci is the most expensive car in Cristiano Ronaldo’s car collection. Bugatti had produced only 10 units of the Centodieci, which themselves sold out prior to release. The car costs over $ 9 million and is one of the most exclusive cars in the world. All cars are only sold to the owners of a Chiron and Ronaldo is one of them.

One of Cristiano Ronaldo’s special edition of the Bugatti brand, the Bugatti Chiron which was purchased by the five time Ballon d’Or winner in 2017,is capable of reaching a top speed of 490.484km/h.

This is the ideal car to be included in the luxury car collection of Cristiano Ronaldo. Being a sport an, it is only natural THAT Cristiano Ronaldo has decided to settle for Sporty and fast and furious cars.

A ride made for kings, the Rolls-Royce Cullinan had also been included in the car collection of Cristiano Ronaldo.

The Rolls-Royce Cullinan is a full size luxury sport utility SUV which comes with a 6.75 L N74B68 twin-turbocharged V12 engine, capable of reach a top speed of 155 mph. It can accelerate from 0-100 mph in 10.4 seconds. Its sedan body style adds more luxury and class to it.

If you are a lover of sport cars, then you can’t rule Ferrari out of your car collection not to talk of the Ferrari 599 GTO which powered by a 6.0L V12 6-speed manual transmission which makes the sporting life enjoyable.

It is capable of hitting a top speed of 208mph and can accelerate from 0-62 mph in 3.3 seconds. The 6 speed manual transmission, V12 engine is also capable of generating a power of 670 hp and 457 Lb-ft of torque.

The McLaren Senna is another superfast exotic car which was named after Aroton Senna, a legend in the F1(formula one).

What makes the car distinct from others is its incredible speed of 0-100 km/h in less than 2.5 seconds at a top speed of 208mph.

Also a very classic ride with amazing interiors and exteriors, Ronaldo has the car his own.

One of the fastest and exotic cars in the world right now is the Bugatti Veyron which is driven by a 8.0 L (488 cu in) quad-turbocharged W16 which is capable of reaching a top speed  at 253 mph.

It is also capable of accelerating from 0-60 mph in 3.7 seconds. Though not as expensive as others in the list, the Mercedes-Benz GLE63s also provide the needed luxury and comfort, which explains why Cristiano Ronaldo has included it in his car collection.

The Audi RS7 is a luxury ride that comes with a four door, with a powerful twin-turbo V-8 engine, capable of generating a 590 horsepower.

Cristiano Ronaldo currently owns a real estate which boasts of a 7 storey mansion, a New York city apartment and a holiday resident next door to Conor McGregor, which is worth $30 million.

He also owns a yacht which he spends most of his vacation in with his family.

Thanks for reading about Cristiano Ronaldo Cars and Houses. leave your reply in the comments below.