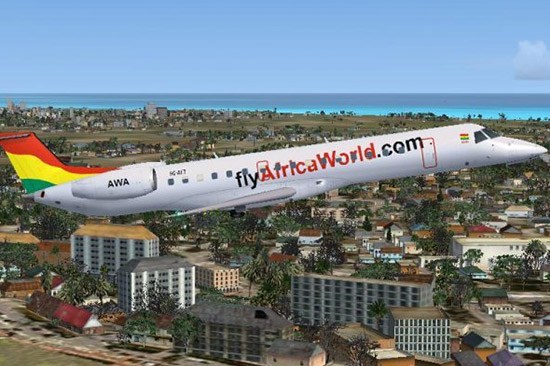 Africa World Airlines Limited (AWA) is a Ghanaian airline company that was incorporated in 2010 and commenced flights in 2012. It has its head office in Airport City Accra, and its main hub at Kotoka International Airport in Accra.

It is the largest airline in Ghana with over 600,000 passengers transported in 2019, accounting for 68% of domestic passengers and 20% of all air passengers in the country. The airline has been consistently profitable since 2014.

AWA is a joint venture between Ghanaian shareholders SAS Finance Group and SSNIT, with minority shareholdings also by both HNA Group and China-Africa Development Fund via Zhongjia Investments of China.

After securing funding and partnership for the project, the initial management team led by CEO Zhang Jiuhua and COO Sean Mendis proceeded with the technical certification of the airline.

AWA took delivery of its first Embraer 145 aircraft in August 2012, immediately followed by a second aircraft in September 2012.

It received its Air Operator Certificate on 21 September 2012 and commenced flight operations that same day with daily services between Accra and Kumasi.

Flights to Tamale commenced later that year. By 2013, Zhang had been replaced by Michael Cheng Luo as CEO, and Mendis was replaced as COO by Apiigy Afenu.

Services to its fourth domestic destination of Takoradi commenced in May 2015. Plans for expansion of regional routes were temporarily put on hold due to the outbreak of Ebola in West Africa, but the airline nonetheless recorded its first annual profits in 2014.

The airline continued to expand its domestic market share during this period, and focussed on training Ghanaian staff in technical roles such as pilots and engineers to reduce dependence on expatriates.

In May 2015, AWA successfully completed its first IOSA audit, making it only the second airline in Ghana to achieve this international safety standard. In October 2015, Samuel Thompson took over from Apiigy Afenu as COO.

Where is Africa World Airlines located?

African World Airline is located in Ghana with its headquarters in Accra.

Does Ghana have its own airline?

Ghana has been without a national carrier since Ghana International Airlines (GIA) collapsed in 2010.