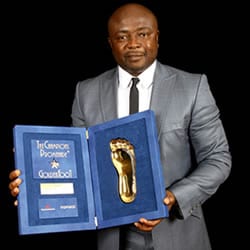 We bring to you Abedi Pele Biography, Family And Life Facts you need to know.

Abedi Ayew   was born 5 November 1964  into a family in the town of Kibi and grew up in the town of Dome at the northern outskirts of the city Accra.

He is known professionally as Abedi Pele, He is a Ghanaian former footballer who played as an attacking midfielder and who served as captain of the Ghana national team. Read Mathieu Flamini Net Worth

He is regarded as one of the greatest African footballers of all-time.  He played for several European clubs and found his fame in the French Ligue 1 with Lille and Marseille, the latter where he won the UEFA Champions League in 1993, among other titles.

Abedi Pele was one of the pioneers of African football in Europe. He was one of the first great African players to make an impact on European club football. He played for teams in Switzerland, Germany, Italy and most famously France, where he was instrumental in Marseille’s prominence in the UEFA Champions League during the early 1990s.

Amongst his international accolades, he was often included in FIFA “All-Star” selections and captained the African All-Stars in their victory over their European counterparts in the 1997 Meridian Cup.

He left Ghana after the 1982 African Cup of Nations to join Al Sadd in Qatar for a $1,000 transfer fee.After a short spell with FC Zürich, he returned to Ghana but, after both Kotoko and Hearts of Oak failed to sign him, joined AS Dragons FC de l’Ouémé in Benin. He would later return to Ghana and play for Real Tamale United for one season.

He began his career in Europe with French side Chamois Niort, subsequently joining Montpellier and Lille before transferring to Marseille. He later joined Lyon.

He also played for Torino of Italy and rounded out his European career with 1860 Munich.

Abedi Pele went on to sign a two-year contract with Al Ain in the United Arab Emirates and was nominated one of the best foreign players to play in the UAE league.

He was a captain and was one of the first African football players to earn a top placing in FIFA World Player of the Year voting in 1991 and 1992.

He is arguably Africa’s most decorated and honoured football player ever, winning the France Football African Player of the Year Award three times, was the inaugural winner of the BBC African Sports Star of the Year in 1992, and the corresponding Confederation of African Football award twice.

He was also awarded the golden ball award for being the best player at the 1992 African Cup of Nations, and was the “man of the match” in Marseille’s historic UEFA Champions League final win over Milan in 1993.

Abedi Pele played for Ghana 73 times and is considered the greatest football player in the country’s history, and among the best in Africa. Until 7 June 2013, when he was surpassed by Asamoah Gyan, he was the top goalscorer for the Black Stars with 33 goals.

He was a fixture in the African Championships of the 1980s and ’90s with his national team, and a member of Ghana’s victorious team in the 1982 African Cup of Nations, but he never had an opportunity to play in the FIFA World Cup, as the Black Stars failed to qualify for the competition during his career.

However, he was arguably the most dominant figure on the African football scene for nearly a decade. His performance in the 1992 African Cup of Nations is often cited as one of the most outstanding football displays by any player in a single tournament.

His native Ghana reached the finals of the Cup that year, only to lose on penalties in the final to the Ivory Coast after Abedi was suspended because of a yellow card he received in the semi-final against Nigeria.

Prior to that, his three spectacular goals against Zambia, Congo and Nigeria proved crucial in putting Ghana through to their seventh appearance in a CAN final – and their first final in ten years.

The performance earned him the added nickname of “The African Maradona”. His solo run goal against Congo in the quarter-finals is often compared to Maradona’s second goal against England in the 1986 World Cup. His backheader goal against Nigeria from the edge of the opponent’s penalty box also heralded international acclaim.

Abedi holds the record for most appearances at the Nations Cup Finals, his record even surpassing the legendary Roger Milla of Cameroon. He made his first appearance at the 13th Nations Cup Finals in Libya in 1982 and for the next 16 years (ending at the 21st Finals in Burkina Faso) continued to grace the most prestigious football tournament on the continent, first as a member of Ghana’s squad rising to become captain in 1991.

Aside from his acclaimed exploits at the 1992 competition, Abedi also earned much acclaim for his three goals at the 1996 competition, where he led Ghana to the semi-finals of the competition despite critics expecting him to be in the twilight of his career.

At club level, he was a key figure in Marseille’s dominance of the French league, resulting in four league championships and two European Cup finals appearances. An attacking midfielder, Abedi became as famous for his sublime dribbling skills as he did for his knack for scoring spectacular and often very important goals. Many such goals became regular “Goals of the Week” on ITN’s weekly “European Football” program.

At Marseille, he was a member of the team’s “Magical Trio” along with Jean-Pierre Papin and Chris Waddle, spearheading perhaps Europe’s strongest league side of the early 1990s, including a European Cup final defeat in 1991.

Abedi was the only remaining member of the trio still with the side when Marseille defeated Milan in the 1993 Champions League final in Munich.

Ayew has the singular honour of participating in more FIFA organized charity matches than any other African player. He is very popular in many African countries, especially the French-speaking countries because of his exploits in France.

In countries such as Nigeria and South Africa, football fans still wear T-shirts bearing his name.

He has become one of the continent’s most respected and important ambassadors. Abedi Pele is a member of FIFA’s Football Committee, and of the player status committees of both FIFA and CAF. That explains why the South African FA made him a Spokesperson for their 2006 World Cup bid. Abedi is considered one of the best players in World History not to have appeared at the FIFA World Cup, and perhaps the greatest African football player ever.

In appreciation of Abedi’s devout services to the country, the Ghanaian government awarded him the country’s highest honour, the Order of the Volta (civil division). He thus became the first Ghanaian sportsman to be so honoured.

On 29 January 1997, the first UEFA–CAF Meridian Cup All-Star Match between Europe and Africa was played in Benfica’s Estádio da Luz in Lisbon and was televised in 100 countries worldwide, including 30 in Africa, for an audience of 60 million viewers. Abedi Pele was on target with a stunning goal early in the first half and, after Vincent Guérin had equalised for Europe just before half-time, it was the 1998 African Player of the Year, Mustapha Hadji, who struck Africa’s 78th-minute winner in the 2–1 win.

In 2001, the UEFA–CAF Meridian Cup All-Star Match format was changed slightly for the second All-Star Match to bring together great players aged between 35 and 45 who now revel in their ‘veteran’ status and play the game purely for pleasure. The squad sparked off memories of great footballing moments at club and international level

In June 2001 he was nominated by the present government of Ghana to serve as the next Chairman of the FA, an opportunity he later gave up for a more experienced former coach of Ghana for which in his own words said that this was to be an opportunity to learn from his superiors.

At present he owns a first division club, called Nania, with the future hopes of nurturing the young talent to augment the fledgling league of the country. He has also been involved with various charity work across the African continent.

The allegations stem from an astonishing 31–0 victory recorded by his club, Nania FC over a much respected Okwawu United side.

A similarly farcical 28–0 result  was recorded in another second division match played between Great Mariners and Tudu Mighty Jets on the same weekend. The clubs involved in that Second Division Promotion Play-off Zone III match were also investigated and subject to the prospect of stiff penalties and demotions.

Despite his vehement denials, Abedi had been chastised by some members of the Ghanaian media, who were demanding that strong punitive actions be taken against him, by Ghana’s football governing body as well as the legal system. His wife Maha Ayew was on 3 November 2008 banned from football against this Manipulations Scandal

Abedi has four children, three of whom have followed their father into football. Ibrahim Ayew plays for Gibraltarian club, Europa where he’s played four games this season. Andre Ayew currently plays for Swansea in the English Championship and has taken his father’s former role as captain of the Black Stars.

Jordan Ayew is Ghana’s first-choice striker at the moment and has scored four goals for his club side Crystal Palace in the Premier League.

He started off the next ten years of his career by returning to Marseille before playing for Lyon, Torino, 1860 Munich and Al Ain.

Abedi Pele was a serial winner in his career for both club and country. He won the French Division twice in 1991 and 1992 before crowning it off with the UEFA Champions League the next year.

While at Al Ain, Abedi Pele won the UAE Pro-League and the President’s Cup. Abedi enjoyed success with the Black Stars as well, winning the African Cup of Nations in 1982 and three straight WAFU titles, from 1982.

Abedi Ayew Pele became the first Ghanaian in 13 years to be named African Footballer of The Year when he won the prize in 1991. He then went on to win the award twice more in the next two years.

That same year, he was named the BBC African Footballer of The Year. The next year, Abedi picked up the Golden Ball at the African Cup of Nations before finishing ninth for the FIFA Player Of the Year Award.

Abedi made about 552 appearances over the course of his two-decade-long career. He played a total of 479 games for his various club sides, making the most appearances for French club Marseille, where he played 112 games.

He scored 157 club goals with the 28 goals he netted for both RTU and Al Ain, the most he has scored for a single club.

For the national side, Abedi earned 73 caps and scored 33 goals