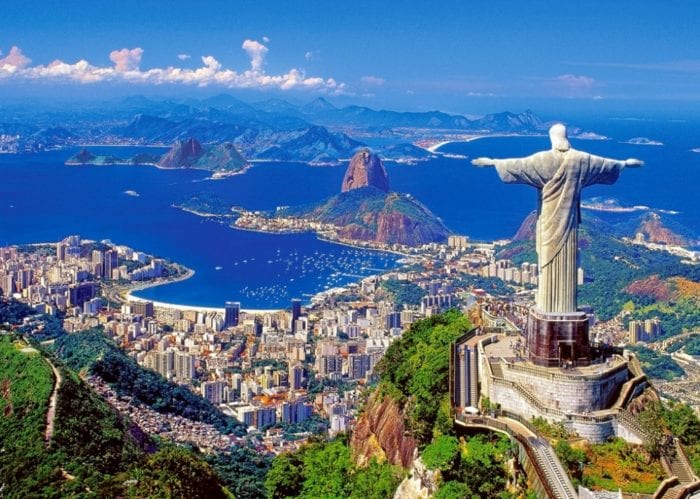 As the largest country in South America, Brazil is a vast playground for the intrepid traveller with everything from dense, exotic rainforest to bustling, dynamic cities, as well as sprawling national parks and glorious, jaw-dropping beaches. If you’re feeling spoilt for choice, here are the 20 attractions that are must-sees in Brazil.

Foz do Iguaçu are one of the largest waterfalls in the world. This impressive natural phenomenon straddles the border of Brazil, Argentina, and Paraguay and is made up of hundreds of powerful cascades that tumble down into the fast-moving body of water below. A highlight is the Devil’s Throat, an 80-metre fall where visitors can look over the edge of a wooden platform that crosses the top.

One of Brazil’s most iconic monuments and Rio’s most visited attraction, Christ the Redeemer captures the imagination and hearts of hundreds of thousands of travellers each year. In addition to the symbolic importance in the Catholic community, the statue is also one of the New 7 Wonders of the World and provides spell-binding views over Rio de Janeiro.

Made up of a collection of 21 islands, Fernando de Noronha is a slice of paradise in Brazil. As a protected national marine park, the area is home to a diverse and rich ecosystem that includes dolphins, reef sharks, tropical fish, and rays. Famed for its undeveloped beaches and rugged, green coastline, it is a picturesque retreat and ideal for scuba diving and snorkeling.

One of Brazil’s most visited natural wonder is Sugarloaf Mountain in Rio de Janeiro, a rounded peak surrounded by the sea. Visitors take a cable car to the top to enjoy panoramic views over the city, the coastline and across the ocean – the most rewarding time to go is at sunset when the lights of the city twinkle below, while the sun casts shades of pink, orange, and red across the sky and sea.

Located in the north of the country, Lençóis Maranhenses National Park is a striking desert landscape made up of sloping white sand dunes that stretch tall and wide, and dotted with rainwater lagoons that nestle between the valleys of the sand banks. The largest lagoons there are Lagoa Azul and Lagoa Bonita.

A huge wetland that swallows up the west of Brazil before sprawling into Bolivia and Paraguay, the Pantanal is a wildlife haven rich in a diverse ecosystem of rare and wonderful creatures. Nature lovers can spot hundreds of species of birds, in addition to large mammals such as jaguars and capybaras. Some of the most famous residents there are the thousands of caimans.

One of the most ecologically complex regions in the world, the Amazon rainforest is an extraordinary natural wonders. The dense forest provides fertile grounds for thousands of endemic species, while the Amazon river provides a home for incredible freshwater life, including the elusive pink river dolphins.

Stretching across the central of Brazil is Chapada dos Veadeiros, an immense national park comprising deep canyons, hardy vegetation, and imposing quartz crystal formations. It is a fertile ground for several orchid species that grow wild throughout the park, and local residents include jaguars and armadillos.

Pelourinho is the historic city centre of Salvador in the state of Bahia. The vibrantly coloured buildings are a picturesque example of how the African, indigenous and European cultures, which were thrown together in Salvador, have converged throughout the centuries.

Located in the exotic northeast of Brazil, Fortaleza is a coastal city with strong winds that have attracted adrenaline-junkie kitesurfers for years. Watch the surfers race across the sea’s surface, their trajectory temporarily broken by impressive, daredevil leaps. The city is famed for its fresh, locally-sourced seafood with beachside restaurants in abundance serving Fortaleza’s delicious cuisine.

Jalapão State Park is in the lesser-known state of Tocantins, yet the park has long been on the radar of curious travellers who love adventure. Known for its deep-orange dunes, raging rivers, and cascading waterfalls, it is a prime example of untouched wilderness that will keep any intrepid visitor satisfied.

Just a short drive from Natal in the state of Rio Grande do Norte, the Genipabu dunes are an ever-changing collection of sand dunes that are shaped and reshaped by the daily winds that come off the coastline and whip over the sands. The region offers a host of adventurous activities such as buggy rides, camel treks and sledging down the sand dunes.

The charming colonial city of Olinda sits in the north of the country, in the state of Pernambuco. Located on a hilltop, it is a cultural wonderland of churches, museums, and buildings that have kept their colonial façade. The best time to go is during carnival when the city comes alive with vibrant, colourful street celebrations that reflect its strong African roots.

Located in the Western Brazil, but extending into Bolivia is the Pantanal, one of the world’s largest and most diverse freshwater wetland ecosystems. To visit this place, the tourist get to go to Campo Grande, in the state of Cuiabá (Brazil’s center-west) and reach the city of Corumbá. From each one of this cities you can visit the most beautifull places: from Campo Grande you can go to Bonito and Cuibá is the gateway for Chapada dos Guimarães. If you get a little bit more of time to explore this places, than we can suggest you to visit the Bananal Island, that is the largest river island in the world. The Bananal Island is located in the Brazilian state of Tocantins, as should be good to reach the brazilian capital of Palmas to start your explorations.

You will have a lot of fun here in the Rio Beaches. This is one of the most important cities from Brazil, and also used to have some of the most beautifull beaches as well! And you can get here almost what you want: Copacabana, Ipanema and Leblon beaches are side by side and remains as the favorites. If you want to stroll a little bit, then Avenida Atlântica is a great place for that. You can walk around with security and without any kind of trouble. If you want to go ahead, try to visit Praia do Arpoador, a prime site for surf and great location for watching the local guys catching the waves.

Who was out of the world in the last few years that can’t talk some words about the Amazonia and the Amazon River. Well done, this is just the most important ecosystem in the world. Is also the most broadleaf forest that cover a huge area of the entire continent of South America. This region includes territories that belongs to nine nations. From the total, 60% is majority from Brazil, 13% with Peru, Colombia with 10%, and with minor amounts in, Venezuela, Ecuador, Bolivia, Guyana, Suriname and French Guiana. One time in Brazil, try to spend some days in the capital of Amazonas, the city of Manaus. This should be a good point to start your jungle exploration. By the way, Manaus is a huge city, you will also enjoy amazing days in this brazilian capital.

This is one incredible place in the border of Brazil and Argentina. Iguazu, or Iguaçu Falls is located in the Rio Iguaçu, brazilian state of Paraná and is considered one of the brand New Seven Wonders of Nature, by the New Seven Wonders of The World Foundation. You can visit this wonderful atraction by both sides: Puerto Iguazú in Argentina and Foz do Iguaçu in Brazil. Iguzu is wider than Victoria Falls in Africa and Niagara In US as well.

Maybe the most popular tourist attraction in Brazil. This statue of Jesus Christ is located in Rio de Janeiro, Brazil, with His face fronting Sugar Loaf. The Statue of Christ the Redeemer is 98 feet high and is the second largest Art Deco sculpture in the world. It is at the Peak of Corcovado Mountain and has become an icon of Rio de Janeiro and Brazil. It was made with reinforced concrete and Soapstone. Every tourist can visit the top of the place and have this amazing view from the city of Rio de Janeiro.

Advertisement
Related Topics:Brazil
Up Next