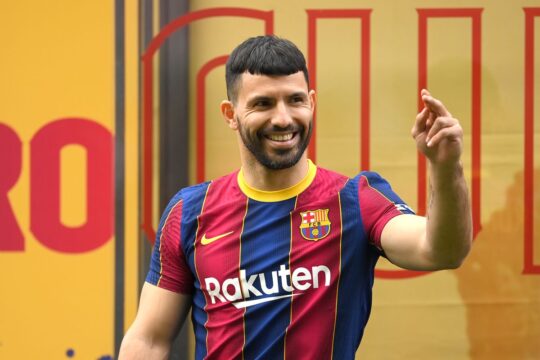 Sergio ‘Kun’ Agüero is one of the biggest names in world football. So maybe you already knew some or all of the following nuggets of information about the Argentine star…

When he was kid, Agüero used to watch a Japanese anime series called Kum Kum. It was his grandparents who started calling him ‘Kun’ because of a certain similarity between the child and character, and the name has stuck ever since…

Sergio is the second in a family of seven children. But he is the only one who uses his mother’s surname Agüero, while all the others are called Del Castillo after his father.

Kun’s 25-year-old brother Mauricio is currently at Independiente in Argentina, while 23-year-old Gastón has played in Spain and Mexico, but is now back in Argentina playing for third-tier outfit Club Atlético San Miguel.

Sergio Agüero married the daughter of the late-great Diego Maradona, and their son, born in 2009 and called Benjamín, also has a very special godfather: Leo Messi.

Agüero was the youngest player ever to feature in a top flight game in Argentina. He was just 15 years, 1 month and 13 days old when he came on for Independiente, surpassing the previous record set by his future father-in-law Diego Maradona.

He was still only 17 when, in 2006, he was sold to Atlético Madrid. The 21 million euro transfer was a new club record for the red-and-whites, although that amount has since been exceeded on several occasions, to buy the likes of Joao Fèlix, Diego Costa, Antoine Griezmann and Thomas Lemar.

Agüero was, together with Leo Messi, part of the Argentina team that won the gold medal at the Beijing 2008 Olympics. They have gone to play alongside each regularly for the senior team.

Agüero has set a number of records in his time at Manchester City, including a club record of 260 goals, 83 more than the previous holder, Eric Brook in the interwar period.

Look online and it shouldn’t be too hard to find Agüero singing and dancing a song named after him and penned by an Argentine ‘cumbia’ band called Los Leales.

As youngsters will know, particularly since the height of lockdown, Agüero has become a huge fan of live-streaming, with a massively popular Twitch account and his own e-sports channel called KRÜ (play on the word ‘crew’ and his own nickname).

The Richest Pastor in The World 2022